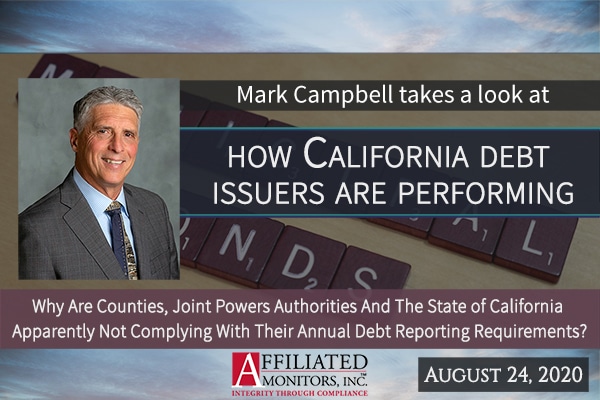 Mark Campbell looks at how California debt Issuers are performing: A three-part series on LinkedIn [Part 3]

By Dan Barton AMI News, Mark Featured, Media No Comments
Why Are Counties, Joint Powers Authorities And The State of California Apparently Not Complying With Their Annual Debt Reporting Requirements?

This is the third in a series of articles on compliance among public agencies with the requirement to submit an annual debt report to the California Debt and Investment Advisory Commission pursuant to Senate Bill 1029 (Chapter 307, Statutes of 2016). In a sample of issues sold between April 4, 2017 and May 8, 2020, I found that only 32 percent of the reports were filed on time, forty-four (44%) percent were late or past dues, and twenty (20%) percent were pending. For another four (4%) percent of the issues the requirement to submit a report had ended. 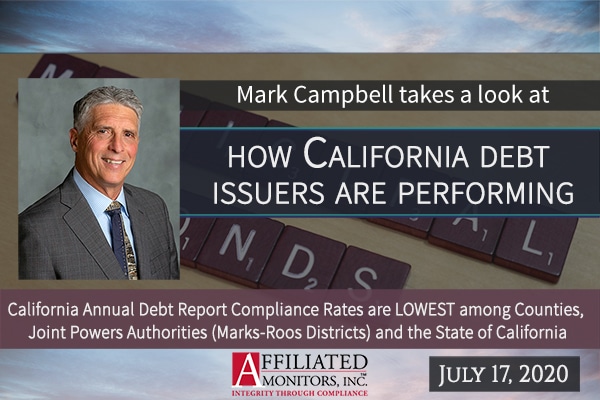 Mark Campbell looks at how California debt Issuers are performing: A three-part series on LinkedIn [Part 2]

In June, I posted comments on the low compliance rates among public agencies required to submit annual debt reports under California law. Senate Bill 1029 (Chapter 307, Statutes of 2016) requires public agencies that report the sale of debt to the California Debt and Investment Advisory Commission (CDIAC) after January 2017 to report to CDIAC on the debt until the principal is paid off and the proceeds fully expended.

I randomly sorted from all those agencies that had reported to CDIAC between April 4, 2017, the first submittals under the new law, and May 8, 2020, to assess compliance. 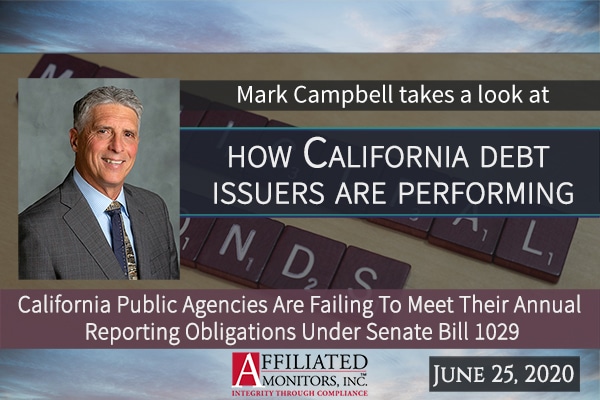 Mark Campbell looks at how California debt Issuers are performing: A three-part series on LinkedIn [Part 1]

California public agencies report on their capital expenditures in a variety of ways, including reports to their governing board and to oversight committees. These expenditures are subject to the agency’s annual audit and, in theory, compliant with administrative and accounting procedures. But, in truth, none of these approaches provides a complete understanding of what was built and how much was paid for it, undermining taxpayer efforts to assess the cost-benefit ratio of public capital improvement programs. In 2016, California passed Senate Bill 1029 requiring public agencies to provide an annual update on the debt they had issued.