Mitigating Legal & Ethical Risks in Public Agency Use of Automated Decision-Making Tools: AMI to host webinar — TO BE RESCHEDULED 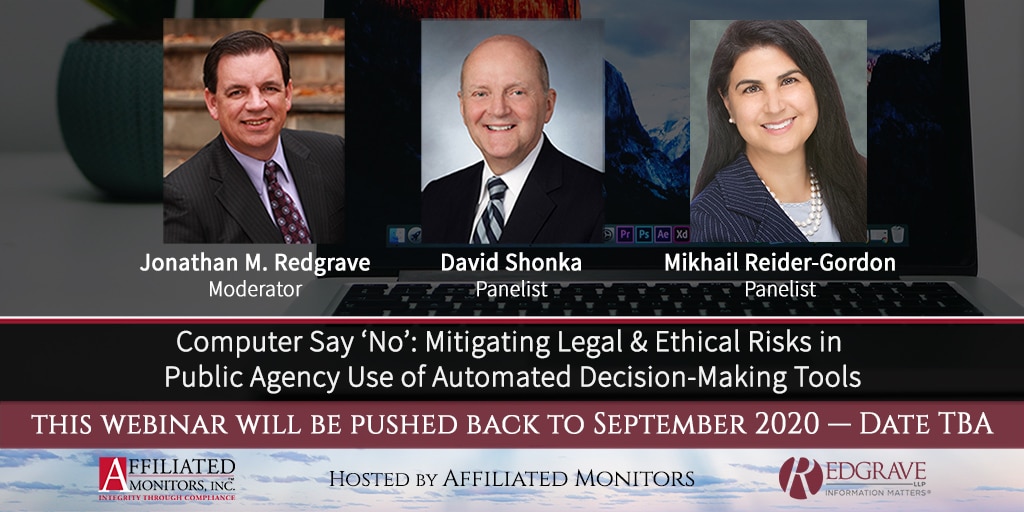 Due to a scheduling conflict, this webinar will be pushed back to September 2020.
We apologize for any inconvenience & will be in touch when the new date is finalized

The cities of New York, San Francisco and Oakland have passed local laws designed to address bias in automated decision-making (ADM/AI) tools. Alabama, Massachusetts, New York and Vermont have all recently passed legislation either requiring or attempting to establish oversight of the use of ADM/AI in state agencies to help ensure fairness, accountability, transparency and ethical use. A recent precedent-setting case in the EU found a municipality to have violated its citizen’s human rights for use of ADM/AI where the decision-making was opaque. Forms of ADM/AI are already deeply embedded in society and can be found in public agency settings from allocation of employment, housing and other benefits to criminal justice and policing. Several U.S. court rulings in the past couple of years suggest there is a growing recognition that public agencies employing ADM/AI must provide auditability, or transparency mechanisms, as well as oversight to help minimize the chance of harms such as bias and discrimination impacting citizens. Join this panel in a discussion of applicable regulations and of practical approaches toward achieving transparency and accountability in an emerging area of compliance and ethics for public agencies and those who contract with them.

Who should attend:
General counsel and compliance and privacy officers from public agencies at all levels; attorneys representing municipalities, special districts; counsel/compliance officers from companies that do business with local, state and federal agencies; civil and human rights law defenders; personnel from IG offices; anyone interested in understanding entry points for discrimination and bias.

Moderator:
Jonathan Redgrave co-founded Redgrave LLP in 2010, a national law firm focused on addressing complex legal challenges that arise at the intersection of the law & technology. In 2020, Redgrave was the only law firm to be ranked Band 1 in eDiscovery & Information Governance by Chambers USA. With decades of dedicated eDiscovery, information governance, data privacy & complex litigation experience, Jonathan is internationally recognized for his work with Fortune 500 companies & Am Law 100 law firms. He is an influential thought leader & Chambers USA has named him a “Star Individual” in the field. Jonathan is a moving force within the Sedona Conference & has authored & edited numerous publications including serving as the first Editor-in-Chief of “The Sedona Principles.” He also serves on the Georgetown University Law Center Advanced eDiscovery Institute Advisory Board.Jonathan speaks worldwide on information law topics, including cross-border discovery, privacy & emerging technologies.

Panelists:
Mikhail Reider-Gordon is a lawyer and Managing Director of Institutional Ethics & Integrity at Affiliated Monitors. Ms. Gordon’s practice areas of expertise include technology and privacy compliance, accountability in artificial intelligence/automated decision-making tools; anti-corruption; the public sector and international law. She began her professional career at the RAND Corporation and has spent decades working in both the public and private sectors at the intersection of compliance, technology, ethics, investigations, and data. Mikhail currently serves as the Technology Officer of the American Bar Association’s Section of International Law.

David Shonka, Partner at Redgrave LLP, leads the Firm’s privacy and cybersecurity practice. He is widely recognized and respected in both the government and private sector as an authority on Information Law. Clients seek David’s counsel as they manage issues related to privacy, security, eDiscovery, cross-border data transfers, government civil law enforcement investigations, and information governance. With his outstanding record as a trial and appellate litigator and legal strategist, David is considered a thought leader in the broader legal community. Before joining Redgrave LLP, David served three terms as the Acting General Counsel at the Federal Trade Commission (FTC) and ten years as the agency’s Principal Deputy General Counsel. In 2015, he received the Presidential Rank Award for Meritorious Executive, one of the highest awards given to career government employees.